The core of Fraport’s new 300 sqm simulation center located at its Frankfurt Airport (FRA) home base is a tower simulator for training of air traffic controllers. After a demonstration of the DFS Tower Simulator projection system quality, which we installed in Langen 2011, Fraport decided to order a projection solution for their own ATM simulator.

About the client and the ATM simulator
Fraport AG is one of the world’s leading airport management companies. The simulator provides sufficient capacity to simulate Fraport’s current and future high-traffic volumes on the ground at one of the world’s busiest aviation hubs, which served more than 57.5 million passengers and more than 2.1 million metric tons of cargo in 2012. The Fraport Simulation Center comprises 10 controller working positions, located in two separate 3D tower setups, supported by 12 pseudo pilot working positions for simulating up to 120 movements per hour.
Fraport’s decision to have its own on-site simulator for training and also for validation is a logical response to the airport company’s continuously growing infrastructure at FRA, as well as the increasingly complex Air Traffic Management (ATM) system environment. 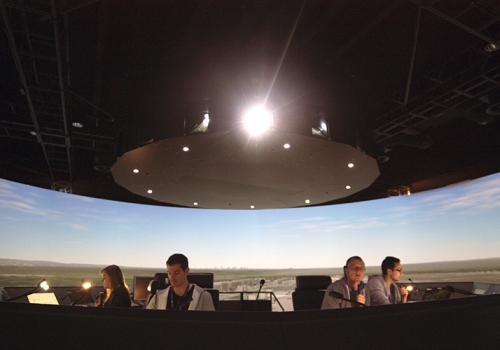