On behalf of Autonomous Vehicle Simulation (AVS) – a joint-venture formed together with Groupe Renault and Oktal, a subsidiary of Sogeclair, a French aerospace and simulation company based in Toulouse – we have designed and implemented an immersive 15 channel 360° 3D Stereo Visual Display System for the ROADS (Renault Optimization Autonomous Driving Simulator) at Renault Technocenter near Paris. The VDS is equipped with a fully automated calibration system including color calibration from domeprojection.com. It also comprises the domeprojection.com warp&blend solution for the VIRES virtual test drive image generators and dynamic warping capabilities.
Together with the BMW High Fidelity-, the BMW High Dynamic and the Daimler AG MBS Driving Simulators we have now been delivering Visual Display Solutions for almost all technologically leading driving simulators in the world.

About the ROADS – Renault Optimization Autonomous Driving Simulator
The ROADS Driving Simulator is a 9-degree-of-freedom (9DOF) system with fast electric linear power systems for the 30 meters long rails in two directions, a ± 180 yaw-table for urban driving, a complete fiber-carbon 360° dome with our immersive display system, as well as a complete car cockpit equipped with head and eyes tracking systems.
ROADS is used by Groupe Renault and the Renault-Nissan Alliance for autonomous vehicle development testing in a virtual environment. In particular, man-machine interfaces (MMI) are validated and tested for its driver acceptance.
Specifications of the Renault ROADS Driving Simulator:
– highly dynamic longitudinal and lateral acceleration of up to
1.0 g
– sled length of 30 metres
– motion-base with ± 180 yaw table
– hexapod can carry 6 tons of payload. 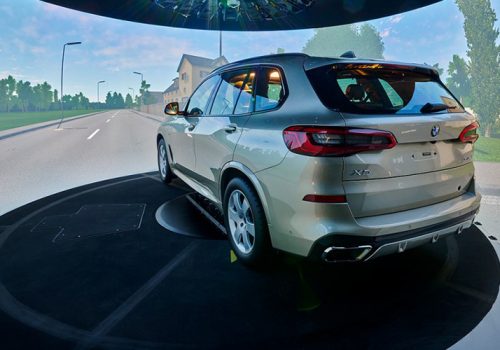