Project
Renewal of the projection area as well as planning and integration of a 25-channel 3D stereo laser projection system for the “Elbe Dome 2.0“: a Mixed-Reality Lab with a 400 m² large-scale projection, consisting of a cylindrical 360° projection screen having a diameter of 16 metres and a height of 4 metres, seamlessly combined with a floor projection.

Since 2006, the mixed reality laboratory “Elbedome” has been the central element of the research infrastructure of the Virtual Development and Training Centre (VDTC) at the Fraunhofer Institute for Factory Operation and Automation IFF, Magdeburg.

After we had already realized the measurement and calibration as well as the 2D and 3D geometry correction for several eye points using domeprojection.com technology in 2007, we were commissioned by the general contractor Carl Zeiss Jena GmbH, Simulation Projection Solutions Department with the extensive upgrade of the projection system in the MR laboratory now called “Elbe Dome 2.0“. We planned, delivered and integrated the large-scale projection system, consisting of 25 high-resolution 4k laser projectors with 3D stereo capability. Furthermore, the projection screen was modified and an automatic calibration system from domeprojection.com was installed.
The upgrade has not only replaced the former advanced laser projector technology from 10 years ago, but also greatly improved the brightness and resolution of the 3D display as well as the graphics performance. The floor projection and the omission of any disturbing fixtures enable a dramatically improved immersion of the virtual environment.

After the conversion and reopening in May 2018, the shape of the Elbe Dome resembles that of a cylinder with a diameter of 16 metres and a height of 4 metres. With a 360° wall surface and floor area, it has a huge – and in Europe unsurpassed – projection surface of over 400 m².
“Elbe Dome 2.0” enables the representation, exploration and interaction with three-dimensional, holographic virtual objects and avatars of remote users in space and thus comes amazingly close to the presentation quality of the most anticipated “holodeck”.
Due to the enormous dimension compared to classical projection systems and the complete immersion after the conversion, the “Elbe Dome 2.0” is used especially for the representation of large objects such as machines, plants, factories or entire cities on a scale of 1:1. Holographic experiences are possible with elaborate person tracking, active 3D glasses and various input devices for handling of virtual objects in the mixed reality environment. Up to 20 people can research and develop in the new “Elbe Dome 2.0“.

About the Fraunhofer Institute IFF, Office Elbedome
The large-scale Mixed-Reality Environment “Elbe Dome 2.0” is particularly suited for the representation of large objects such as machinery, plants, factories or entire cities on a scale of 1:1.
The office Elbedome designs virtual environments and develops VR-tools that are customized for individual needs of their clients to optimize their operational performance. Such environments and tools can be used, for instance, for special-purpose machines production optimization, CE- compliant safety assessments or to plan material flows more effectively.
It develops integrated solutions for virtual planning, simulation and modelling as well as technology-based learning and qualification in interactive environments.

AP Feature about the Elbe-Dome 2.0

Immersive Language Learning in the Elbe-Dome 2.0 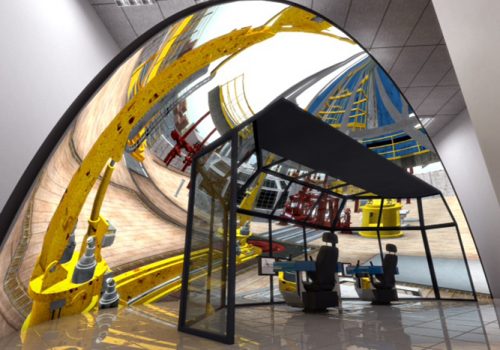